Based in Lucas, World's Largest Things, Inc., was established in 2007 as the non-profit expansion of a project initiated in 2002.

For the past 15 years, they have explored the highways and byways of the United States, collecting images and stories behind small towns that have built iconic, oversized structures known as World's Largest Things.

Until recently, the collection has been housed in a series of mobile museums, trunk shows and portable exhibits, traveling across the country to galleries, festivals and museums. In December 2016, a local businessman unexpectedly donated a downtown building to the group for the establishment of a permanent museum space. A grant from the community foundation helped World's Largest Things prepare the building for public use, which included addressing heat and water issues and installing LED lighting. The new location has received many positive interactions so far.

"During Lucas’ annual Adam’s Apple Festival, members of the community engaged their natural curiosity, checking out sights that threw their doors open to engagement," said grantee Erika Nelson. "Local youth made repeat visits to play the miniature version of a miniature golf course in between Festival activities, expressing their enjoyment of a new free and accessible art experience in downtown Lucas." 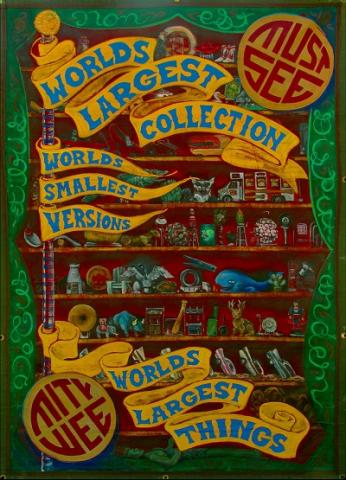