A rural Russell man died in a two-truck crash Thursday afternoon in Barton County according to a press release from Barton County Sheriff Brian Bellendir.

On January 13 at about 12:20 PM, Barton County Sheriff's Deputies were dispatched to a motor vehicle accident at the intersection of Northeast 130 Avenue and Northeast 70th Road. The reporting party stated two trucks had collided at that location and were on fire.

Upon arrival, Sheriff's Deputies found the trucks on the roadway completely engulfed in flames. Deputies were advised that the driver of one of the vehicles was still in the cab.

Investigation at the scene indicates a 2005 Mack truck configured as a water hauler was southbound on Northeast 130 Avenue. The Mack was loaded with water.

The vehicle was operated by 36-year-old Eric M. Steinert of rural Russell. Steinert was pronounced deceased at the scene by the Barton County Coroner's Office.

The second vehicle, a 1995 Peterbilt truck tractor with a flatbed semi-trailer was approaching the intersection westbound. The Peterbilt was loaded with a Kenworth truck tractor on the semi-trailer. The Peterbilt was operated by 66-year-old David P. Wirth of rural Ellinwood. Wirth was transported to Great Bend Regional Hospital by Claflin EMS. He sustained non-life-threatening injuries and was treated and released.

Investigation indicates Wirth failed to yield right-of-way at the intersection pulling into the path of the southbound Mack truck. After impact the vehicles traveled in a southwesterly direction coming to rest in the west ditch. The Kenworth truck that was loaded on Wirth's vehicle, broke free and came to rest on the roadway. The tank on the Mack was torn from its mounts, also coming to rest on the roadway. Shortly after impact all three trucks caught fire. The fire traveled down the ditch on both sides of the roadway setting fire to two fields and multiple round bales of hay that were approximately one quarter of a mile away. The Claflin Fire Department was able to quickly bring the blaze under control.

Sheriff's Deputies and emergency personnel were on the scene until after 8 PM conducting the investigation and clearing the roadway of debris.

The accident remains under investigation. 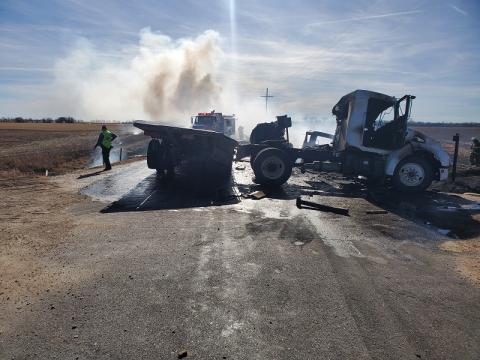