LUCAS-The Russell K-18 Baseball team rallied for four runs in the bottom of the sixth inning and defeated Clay Center ABA 9-6 in the third place game of the 71st annual State Tournament Wednesday afternoon at the Lucas Baseball Field.

Clay Center ABA which beat Russell 10-2 in the East Regional championship game on July 15 in Concordia, took advantage of three Russell errors in the top of the fourth inning to surge ahead 6-4.  Russell got a run back in the bottom of the frame to cut the deficit to 6-5 but was retired in order in the fifth.

Then in the sixth inning Russell tied the score on a Clay Center error on a play at home plate and took the lead on a wild pitch.  Two more runs came home during the at bat giving Russell a three-run lead to work with as the game entered the top of the seventh.

Clay Center got a runner to second base but could not score and Russell earned a third-place finish, their best since winning the most recent of their four K-18 state titles in 2005.

Max Evans started for Russell (9-8) and was lifted in the fourth inning for Mason Rohr who picked up his second victory of the state tournament in relief.

In the championship game, Goodland took down Phillipsburg 4-1 on the strength of an 80-pitch complete game by Kacen Sederstrom.  Goodland claimed its third state title and first since 1985. 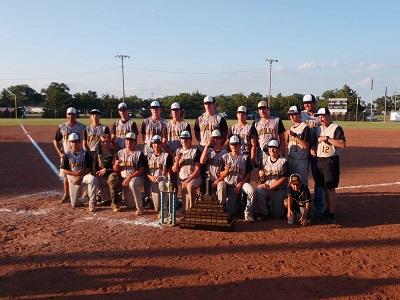