The TMP-Marian-La Crosse Softball team made their first visit to Russell since the 2018 season Tuesday afternoon and the Monarchs were able to continue their recent success against the home team as they swept a doubleheader by scores of 9-7 and 14-4 over Russell-Victoria at Memorial Park.

Game 1 was scoreless through three innings until TMP broke through for two runs in the top of the fourth on a pair of RBI singles.  The Lady Broncos cut the deficit to 2-1 in the bottom half of the inning on a throwing error.  Russell-Victoria nearly tied the score but Tionna Napue was thrown out at home plate trying to score on the play.

The Monarchs then widened the lead to 9-1 with two runs apiece in the fifth and sixth frames and another three-run tally in the top of the seventh providing a seemingly comfortable margin for winning pitcher Madison Augustine.  However, Augustine had trouble finding the plate as she tried to close out the game, issuing three walks and hitting a batter.

Russell-Victoria scored six runs in the bottom of the seventh inning on RBI singles by Brooklyn Nowak and Harlee Donovan, an error, a wild pitch and a passed ball.  Melany Huser was the tying run at the plate with still only one out when she hit a line drive towards left centerfield.  The ball however was caught by Jaci Von Lintel who utilized her height to snare the ball and she then flipped to second base to double up Kayla Noller to end the game.  Nowak pitched the entire game for the Lady Broncos but took the loss.

In Game 2, the Monarchs touched up Napue who took the loss for four runs in just a third of an inning before she was replaced by Nowak.  Five runs crossed the plate overall to give TMP a 5-0 advantage before Russell-Victoria had a chance to bat.  The Lady Broncos got two of those runs back in the bottom of the inning on a pair of Monarch errors.

TMP (10-6) then plated four runs in the second and two more in the top of the third to expand their advantage to 11-2.  Russell-Victoria responded with single runs in the third and fourth innings to close the gap on an error and a fielders choice respectively.  TMP then scored three more runs in the top of the fifth inning, all with two out and Augustine needed just three pitches to retire the side in order and end the game due to the 10-run rule as she picked up her second victory of the afternoon.

Russell-Victoria, which honored six seniors in between games (pictured below), finishes the regular season with a record of 7-13 and will open Regional play on Monday, May 16 against an opponent to be determined.  The first round games will be played on the home field of the higher seed with the semifinals and championship game to be contested on TMP's home field in Hays on Wednesday, May 18. 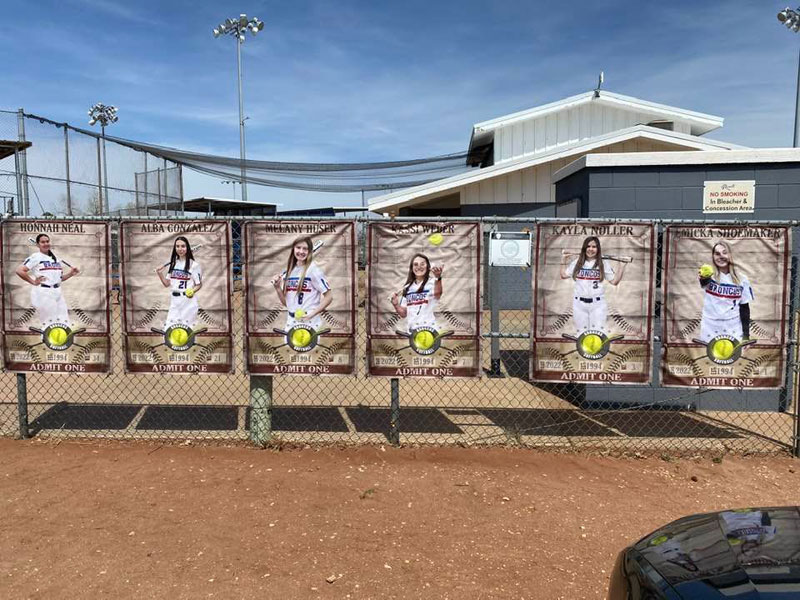