One week after Russell captured its first ever statewide fast-pitch Softball title, Russell is now home to another champion after the 18 and Under Diamond Diablos Softball team captured the crown at the USSSA National Fastpitch Tournament in Wichita on Saturday, July 24.

It's been a busy summer for the Diablos as they competed in several tournaments with their best finish a second place showing at the Battle on the Plains held in Hays July 10 and 11 as Russell recorded a 5-1 record.

The National Tournament at the Two Rivers Youth Complex began with pool play on Thursday, July 22 and the Diamond Diablos rolled through that with three victories.  In Game 1 Russell defeated Lightning 04 out of Coffeyville, KS 7-2 with Raleigh Kramer picking up the win.  In Game 2 Kendra Bay was the winning pitcher as Russell took down the Wichita Patriots 8-0 and in the third and final game of pool play, Russell downed Pitch Perfect from Valley Center, KS 12-0 behind Brooklyn Nowak.

Bracket play commenced on Friday, July 23 and the Diablos pulled out a 4-3 victory over the Wild Blue from Winfield, KS with Kramer recording the victory and Bay notching the save.  Bay then pitched a 6-0 shutout in Russell's next game on Saturday, July 24 against the Motley Crue from Haysville, KS.  In the semifinals, the Diablos defeated the Ralston Renegades from Omaha, NE  9-5 behind Kramer to clinch a spot in the championship game.

The Renegades then forced a rematch with the Diablos after knocking off the Wichita Patriots 10-3 and they needed to beat the Diablos twice to win the title.  However, one game was all that was necessary as Russell trounced the Renegades 10-0 to finish a perfect 7-0 at the tournament with Bay pitching another complete game just as she had on July 17 when the K-18 Softball team clinched the state championship in Lucas with a 14-0 win over Ellis.

This is the first time the 18 and Under Diamond Diablos have captured a National team championship.  Their best previous finish was fifth place at an annual tournament held in the Kansas City area. 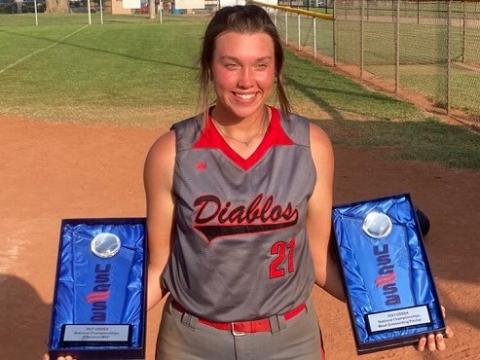 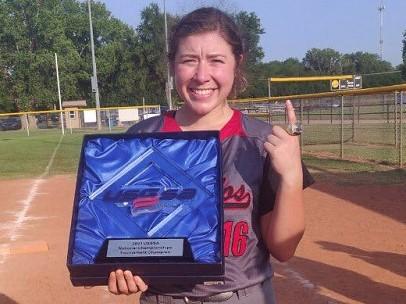